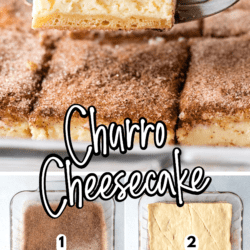 With a buttery, flaky crust, cinnamon sugar topping, and creamy, tangy cheesecake filling, this Churro Cheesecake is both easy to make and ridiculously good. These cheesecake bars require just 6 ingredients and are perfect for serving a crowd.

This churro cheesecake is not your traditional cheesecake recipe. It’s the combination of two desserts that are great on their own but even better together – classic cheesecake and churros, which are known for being fried in hot oil, dipped in melted butter then rolled in a cinnamon sugar mixture.

A graham cracker crust is swapped for flaky crescent dough topped with cinnamon sugar that’s used as both the crust and the topping, with a tangy cream cheese filling in the middle.

Instead of a traditional pie pan, these are baked in a regular baking dish and cut into squares, which is perfect for serving.

Churros are a traditional Mexican dessert, made with pastry dough that is quickly deep-fried and then tossed with cinnamon sugar. They’re a very popular street food throughout Mexico.

Why You’ll Love These Cheesecake Bars

Here are a few reasons to try making this churro cheesecake right now.

These easy cheesecake bars are made with just 6 ingredients. Scroll down to the recipe box for the full measurements.

How to Make Churro Cheesecake

Here’s how to make these churro cheesecake bars in just a few easy steps.

Preheat the oven. Preheat the oven to 350F and prepare the baking pan by spraying it with non-stick spray. For best results, I don’t recommend using parchment paper or wax paper.

Make the cinnamon sugar topping. In a small bowl, combine 1/2 cup of sugar with the cinnamon. Sprinkle 1/4 of the mixture on the bottom of the pan.

Add the crescent rolls. Unroll one can of crescent rolls. Use a rolling pin to roll larger. Press the seams together with your fingers. Carefully place in the pan, this is the bottom crust.

Make the creamy cheesecake filling. In a medium bowl, beat the cream cheese and sugar for 2-3 minutes on medium speed. Add in the vanilla and eggs. Beat to combine. With a rubber spatula, evenly spread the cream cheese mixture over the dough in the pan.

Add the remaining crescent roll. Unroll the second can of crescent dough and seal with seams with your fingers. Place on top of the cheesecake mixture. Sprinkle with the remaining cinnamon-sugar mixture.

Bake. Bake the churro cheesecake for 30 to 35 minutes. The crescent dough should puff up and turn golden in color. Cool on the counter for 1 hour.

Chill and serve. Chill the churro cheesecake in the fridge for 2-4 hours, then cut it into bars and serve.

Here are a few tips for making the best cheesecake bars.

Be sure the pan is well greased. For ease when it comes to slicing and serving, be sure to spray the pan with non-stick cooking spray before adding the crescent dough.

Work with one can of crescent rolls at a time. Crescent roll dough is much easier to work with when it’s chilled so be sure to just unroll one at a time and keep the other chilled while working.

How do I know when churro cheesecake is done? The crescent roll on top will puff up and turn a nice golden brown color.

Serve slices of churro cheesecake chilled or at room temperature with a fork. They can be enjoyed as-is but if you want to serve them with a little something special, add a drizzle of caramel, chocolate, or cream over the top.

Can Churro Cheesecake Bars Be Made in Advance?

I highly recommend eating these cheesecake bars the same day you make them. The longer they sit in the fridge, the softer the crescent dough crust will become. It will also lose the flakiness.

If you do need to store them longer, be sure to keep them tightly covered in plastic once they’ve been sliced.

For an irresistible dessert, drizzle caramel sauce over the bars when serving. 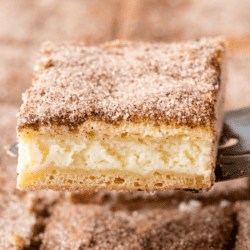