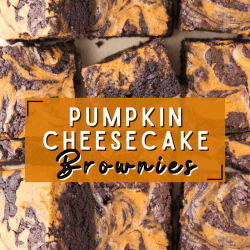 This brownie is fudgy, but not “I’m eating a molten chocolate fudgy brownie”. Its got that crispy and shiny outside that classic brownies have. And it’s slightly chewy (and can be more chewy if you bake it longer). Then there’s the ribbon of pumpkin cream cheese swirled in! This brownie reminds me that there is nothing better than cheesecake & brownies in one dessert.

How To Make Pumpkin Brownies

This recipe can be separated into 2 parts – the brownie batter and the cream cheese pumpkin swirl.

For the brownie batter it’s key to not over mix the dry ingredients into the batter. Mix BY HAND just until the majority of the flour is no longer visible.

Tips for Swirling Cheesecake and Brownies Together

I used a glass 8×8 inch baking pan because that’s what I have in my kitchen! You can use a metal pan as well, however I would recommend decreasing the baking time by 5 minutes. Metal pans heat up faster and can produce chewier brownies.

I’ve made these brownies with both regular and gluten free flour with awesome results on multiple occasions. I recommend King Arthur’s Gluten Free Measure for Measure Flour. Use it as a one for one substitute for regular flour.

How To Cut Brownies Neatly

To get really nice clean brownie squares, I like to refrigerate my brownies for at least 30 minutes before cutting. Then I use a long 8 inch chef’s knife to cut them. But here’s the MOST IMPORTANT TIP 👉 wipe the knife CLEAN between each cut. Yes, it’s annoying, but it works!

How To Store Cheesecake Brownies

If serving them same day you make them, you can store brownies with cheesecake on the counter. Beyond that, I recommend storing them in a sealed container in the fridge. 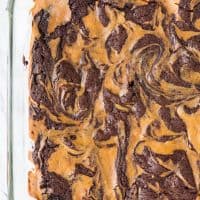