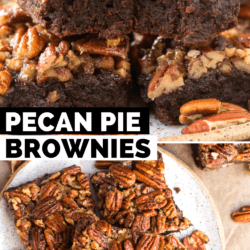 Pecan Pie Brownies are rich and chocolatey with a nutty pecan pie layer! This is a thanksgiving dessert recipe you will want to make each year!

Pecan Pie Brownies at a glance

How to Properly Measure Flour

If you stick the measuring cup straight into the bag of flour, that will result in too much flour being packed into the cup, which can result in dry brownies.

Should I Bake Brownies in a Glass or Metal Pan?

I used a glass 9×13 inch baking pan. You can use a metal pan – I would recommend decreasing the baking time by 5 minutes because metal heats up faster than glass requiring less baking time.

How To Make Pecan Pie Filling

Type of Pecans to Use

How to Tell if Pecan Pie Brownies Are Done

After you add the pecan filling, bake for 30-35 minutes. Pecan pie brownies are done when the pecan topping doesn’t jiggle much when you shake the pan. The filling will continue to set during the cooling process.

It is very important that the brownies cool completely before cutting them because the pecan topping needs to set. The topping sets as they cool. 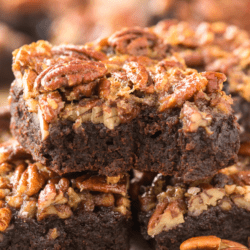 5 from 5 ratings
Prep Time: 12 mins
Cook Time: 1 hr 20 mins
Cooling: 3 hrs
Yield: 20 brownies
Pecan Pie Brownies are rich and chocolatey with a nutty pecan pie layer! This is a thanksgiving dessert recipe you will want to make each year! Made in a 9×13 inch pan so there’s enough to share!
Print Recipe Pin Recipe Rate Recipe

Posted in: Brownies and Bars, Thanksgiving