A few weeks ago I ordered halloween and christmas cookie cutters from my favorite website where most of the cookie cutters are .99 cents! I don’t even bake cookies that often but cookie cutters come in handy.. you never know when you’ll need a cookie cutter of a strawberry or maybe you need a witch, a broom, a black cat, frankenstein, a pumpkin, leaves, or a tombstone. Call me because I’ll probably have what you’re looking for! I kind of forgot about the new cookie cutters because I put them in a tupperware bin underneath our bed. When I went to pull them out, I discovered a whole bunch of things.. some slate pieces I bought for $2 at the antique store, candy canes (from last year!), new year’s eve napkins and silverware, and christmas towels.

It’s so sad that I have a bin full of stuff that I only use for like 30 days out of the year. I decided I better put some of the halloween cookie cutters to good use before I pack them away for the next 335 days. Enter tombstone cupcakes :) I am loving how these cupcakes turned out! I was worried that the tombstones were too big for the cupcakes, but I’m the girl who loves over the top themed treats so what the heck! The tombstones are completely edible because they are made from rice krispie treats! I made up a batch of rice krispie treats and pressed them onto a larger baking sheet. Then used the tombstone cookie cutter to cut out my shapes. The tombstones were refrigerated until they were nice and hard, then dipped in the chocolate mixture and set out to dry on a silicone baking mat. I pipped the “RIP” onto the stones using buttercream before I dyed the buttercream orange. Add some crushed oreos for dramatic effect, and voila! 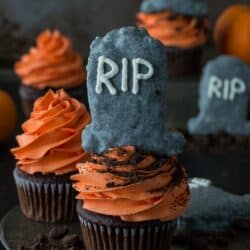 To add the lettering onto the tombstones