The healthier fudgy brownies of your dreams! No refined sugar, butter or oil, plus this recipe doesn’t call for any out of the ordinary ingredients. These are seriously fudgy and estimated to be 174 calories a slice!

I want to introduce you to these healthier FUDGY brownies!

I’ve been working like a mad woman in my kitchen for a week perfecting this recipe. There were a few guidelines I had in mind..

1. create a healthier brownie
2. use normal ingredients
3. it can’t be cakey because I could just eat healthier cake instead, I wanted something fudgy & chewy.

Healthy brownies that use normal ingredients

So my starting point for guideline #2 – use normal ingredients to make healthier brownies – was that I didn’t want to have to go out and buy anything that I didn’t already have in my pantry.

Because chances are if I don’t have it in my pantry, you won’t either, and I don’t want to create a healthier brownie recipe were you have to go buy all these special ingredients you won’t use regularly.

So that took a few ingredients off the table – no coconut flour or other nut flours, no coconut sugar, no alternate sugar products like truvia or stevia. You get the idea.

The only out of the box ingredient in this recipe might be coconut oil, and I’m guessing that 50% of you have it in your pantry, and 50% of you don’t.

I wanted these healthier fudgy brownies to be accessible to everyone with normal ingredients!

How to make healthy brownies

Now let’s talk about the word “healthier”. These are still brownies, meaning they have calories. When comparing these brownies to our super fudgy brownie recipe – these healthier brownies have 174 calories per brownie whereas the super fudgy brownies have 437 calories per brownie (both recipes calculated for cutting the pan of brownies into 12). So these are healthier than your traditional brownie recipe!

Next topic, these are fudgy. If you like your brownies more cakey, this might not be the recipe for you. My husband Ryan prefers his brownies to be more traditional – he wants them perfectly chewy, fudgy and cakey all at the same time, but he would still (and did) happily eat these ones.

Because these brownies are rich & fudgy, one is enough, at least for me! And that way I don’t end up eating 2 or 3.

When they first come out of the oven, they won’t have the same stability they’ll have after they sit for a few hours. You’ll notice that the longer they sit, the fudgier in texture they are.

How to freeze skinny brownies

Allow the brownies to cool completely, cut into slices. Wrap 3-4 slices together in plastic wrap then in aluminum foil. To thaw, place in the fridge overnight. 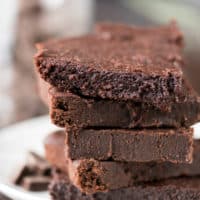 4 from 9 ratings
Prep Time: 10 mins
Cook Time: 25 mins
Total Time: 35 mins
Yield: 16 brownies
The healthier fudgy brownies of your dreams! No refined sugar, butter or oil, plus this recipe doesn’t call for any out of the ordinary ingredients. These are seriously fudgy and estimated to be 174 calories a slice!
Print Recipe Pin Recipe Rate Recipe