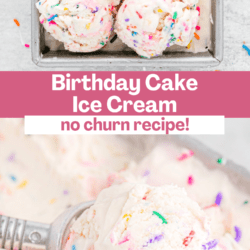 This no-churn birthday cake ice cream recipe is like a birthday cake in the form of a cold, frosty treat! It’s colorful, easy to make, and always a crowd-pleaser!

If you have leftover cupcakes from a party, I’ve got the perfect way to use them up: make a batch of birthday cake ice cream!

Homemade birthday cake ice cream is so much better than store-bought because you can make it with real pieces of cake. Any flavor of cupcake works here, whether it’s a chocolate cupcake, vanilla cupcake, or even Oreo cupcakes! And unlike store-bought birthday cake ice cream, you can make the homemade version gluten-free by using gluten-free cupcakes.

Rather than hauling out your ice cream maker, this is a no-churn recipe made in a loaf or cake pan. Instead of making an egg-based custard, you’ll make whipped cream, which allows you to get a smooth, fluffy texture without churning or returning to the freezer to stir the ice cream every 30 minutes.

This birthday cake ice cream is always a hit at parties, but it’s also the kind of recipe that’s easy to make anytime you have a craving—and some leftover cupcakes.

If you love making your own ice cream, try my Cookie Monster Ice Cream and Oreo Ice Cream too!

Scroll down to the recipe card below this post for ingredient quantities and full instructions.

Is Evaporated Milk the Same as Condensed Milk?

If you’re making this birthday cake ice cream for a party, be sure to allow enough time for it to freeze solid. Six hours is the bare minimum, but overnight is even better!

Flash-freeze the cupcakes. Cut the cupcakes into pieces and freeze them on a baking sheet lined with a silicone mat.

Whip the heavy cream. In a stand mixer or with a handheld mixer, beat the heavy whipping cream and vanilla extract until it forms stiff peaks.

Add the remaining ingredients. Beat in the sweetened condensed milk on low, then gently fold in the cupcake pieces and rainbow jimmies, reserving some for topping.

Freeze the ice cream. Transfer the ice cream to a loaf pan, 8 inch cake pan, or similar container. Scatter the additional cupcake pieces and rainbow jimmies over the top. Cover the pan with plastic wrap or a lid and freeze for at least 6 hours, or overnight.

Here are some of my best tips for perfect homemade birthday cake ice cream:

Store leftover ice cream in the freezer for up to 2 weeks. Let it sit on the counter for 10 minutes or so before scooping. 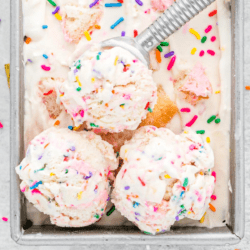