Why another s’more recipe?!

(Is that even a real question??)

This recipe is like the child of this recipe and cheesecake. I took the graham cracker crumb cup from the s’mores cup recipe and combined it with no bake marshmallow cheesecake. Buuttttt!! Then you add all. the. garnishes. All of them.

You could stop right there. But I’m always looking for an excuse to use my kitchen torch, so I toasted (okay, slightly burned) the marshmallows. It adds that something extra to the presentation.

The whole recipe is NO BAKE!

Make the graham cracker cups first! Use a 1/3 or 1/4 cup to press the crumbs into the muffin wells. Then place the muffin pan in the freezer – this will help the crumbs stick together and form a cup!

When you’re ready to remove the graham cracker cups from the muffin pan, use a pointy kitchen knife to pop the cup out of the pan. You can see an example of this in the video below. 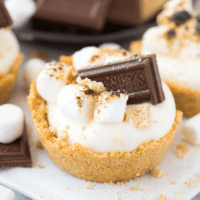 Posted in: No Bake