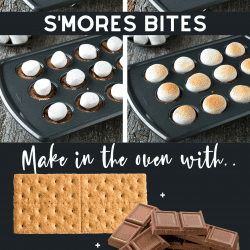 An easy S’mores recipe and one of our favorite desserts to make all year round.

S’mores Bites are a twist on the classic s’mores dessert, make these mini s’mores in the oven!

Making and enjoying s’mores is a summer classic. But what do you do if you don’t have access to a fire pit to make them the old fashion way?

Well you get a bit creative- you can use the grill, the microwave, the stove, and dare I say a candle!

This recipe for S’mores Bites incorporates the 3 key ingredients that everyone loves, but is way more portable to bring to a party than a fire pit!

Why You’ll Love It

I wouldn’t say s’mores bites are less messy than the original s’mores, perhaps a bit fancier, in which case we suggest that you devour them with your pinky finger out and with a napkin on your lap. Just joking!

For the full ingredient list and instructions, scroll down to the recipe card.

The only special tool you need to make this smores bite recipe is a mini muffin pan!

How to make S’mores Bites

Evenly divide the crumb mixture into a mini muffin pan, grease slightly before using. Press crumbs down to form shallow cups. Bake 4-5 minutes or until edges are golden.

This photo shows the bites post-baking and in the process of putting the chocolate squares on.

Remove the pan from the oven and place one Hershey’s bar into each cup.

Cut the large marshmallows in half. Place one marshmallow half, cut-side down, into each cup.

Once you added the marshmallows, then they go back in the oven.

The ‘hardest’ part of this recipe is probably crushing the graham crackers, which I did with my slap chop because I didn’t want to dirty up my food processor.

This is the easiest, non-sticky way to cut marshmallows in half. Dip scissors in a glass of water before cutting each marshmallow. The water will prevent the marshmallow from sticking to the scissors.

After finishing up your S’mores Bites, eat the leftover Hershey’s bars or you could save them for your next real bonfire! 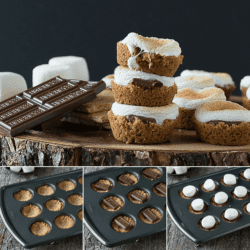 4.35 from 198 ratings
Prep Time: 10 mins
Cook Time: 7 mins
Total Time: 17 mins
Yield: 24 bites
An easy S'mores recipe and one of our favorite desserts to make all year round. S'mores Bites are a twist on the classic s'mores dessert, make these mini s’mores in the oven!
Print Recipe Pin Recipe Rate Recipe