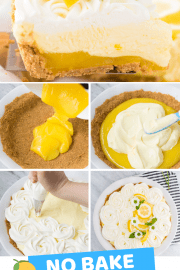 This no bake lemon layer pudding pie is an easy no bake summer dessert! It has a graham cracker crust and then 3 pie layers – a lemon pudding layer, a creamy lemon layer then topped with homemade whipped cream. You can make this lemon pie even easier by using cool whip!

What is a lemon pudding pie?

Together the whole pie is creamy & light, slightly tangy, and very refreshing! It reminds me of a lemon meringue pie!

How to make lemon pie

Layer #1 – combine the milk, lemon pudding and gelatin mixture until smooth. Pour half of this mixture into the pie crust.

Layer #3 – pipe the remaining whipped cream onto the pie in whatever pattern you wish. I choose to pipe rosettes, but you could spread it on with a spatula.

How to use gelatin in a no bake lemon pudding pie

I’ll admit, I was afraid of gelatin for a while because I had one experience where it made my dessert all gummy. I didn’t know how to use it properly. But I want to give you some tips so you can use it confidently!

Gelatin needs to bloom. This is just a fancy way of saying you need to hydrate the gelatin. When you sprinkle gelatin over a liquid (water, lemon juice, etc) it kind of turns into the consistency of applesauce and eventually will become solid. ALSO, it’s important to note that you should do the best you can to evenly distribute the gelatin across the liquid, not just dumping it in a big heap.

How do you get your gelatin to become liquidy once it set? Put it in the microwave for 15-20 second intervals until it’s completely liquidy. Then drizzle it into the other ingredients – in this case the pudding and heavy whipping cream.

The reason I decided to add gelatin to this recipe is to help give the layers of the pie body and shape. The gelatin gives each layer stability because it thickens whatever it’s combined with. Gelatin is a helpful ingredient to use in no bake pies.

I would recommend eating this pie within 2 days.

Can I freeze pudding pie

Yes, this pie can be frozen if you want more of a frozen chilled pie (think ice cream pie). However, I would not recommend freezing this pie and then thawing it. That process can change the texture of the dessert.

Can I substitute cool whip for the whipped cream

Yes! Save yourself a step and use cool whip in place of the whipped cream. I would suggest using two 8 oz containers of cool whip – one for layer #2 (the creamy lemon layer) and one for the topping.