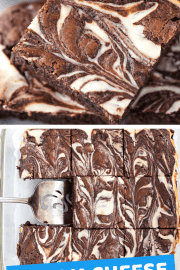 I spent an entire week working on developing our classic homemade brownie recipe.

I had never shared MY classic brownie because I didn’t even know what that meant to me. Do I like fudgy, chewy, or uber chocolatey brownies best?

It was tough, but I spent a week figuring it out!

After I nailed my version of a classic brownie – which is still fudgy but definitely chewy – I wanted to make a cream cheese swirled brownie variation too!

It’s fudgy, but not “I’m eating a molten chocolate fudgy brownie”. Its got that crispy and shiny outside. And it’s slightly chewy (and can be more chewy if you bake it longer). Then there’s the ribbon of cream cheese swirled in! This brownie reminds me that there is nothing better than cheesecake & brownies in one.

Are you interested in the science behind brownies? Keep reading!

How to make a chewy cheesecake brownie

How to make a brownie with a crispy, shiny top

How many eggs should I put in homemade brownies

This recipe can be separated into 2 parts – the brownie batter and the cream cheese swirl.

For the brownie batter it’s key to not overmix the dry ingredients into the batter. Mix BY HAND just until the majority of the flour is no longer visible.

For the cream cheese swirl..

I found it’s best to pipe the cream cheese layer over the brownie batter. That way you end up with nice, beautiful swirls instead of big blobs of cream cheese.

How to cut brownies cleanly

To get really nice clean brownie squares, I like to refrigerate my brownies for at least 30 minutes before cutting. Then I use a long 8 inch chef’s knife to cut them. But here’s the MOST IMPORTANT TIP —> wipe the knife CLEAN between each cut. Yes, it’s annoying, but it works! 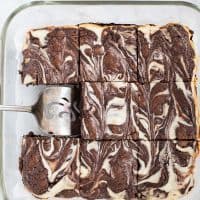