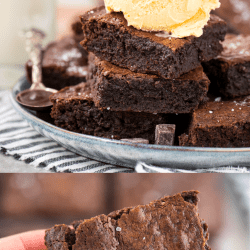 Our family’s go to classic homemade brownies! These brownies are fudgy, chewy, and have lots of chocolate flavor.

Plus you can customize them with different add-ins likes nuts, mint chips, and caramel. We also tested this recipe multiple times and found it makes AWESOME gluten free brownies!

Guys, I am just going to say it. Brownies can be hard to photograph because they slightly look like square pieces of poo!

I’ve been intimidated of doing a “classic” brownie because that can mean so many different things to so many people.

Fudgy, chewy, cakey, crispy outside, moist, chocolatey -these are all words people use to describe a classic brownie.

I realized I didn’t even know what type of brownie was my favorite. How am I suppose to create MY classic brownie when I’m not even sure what I like?!

So the brownie testing began.

5 batches later – starting with more fudgy brownies and realizing I like a chewier brownie, this is my definition of a classic brownie.

It’s still fudgy, but not I feel like I’m eating molten chocolate fudgy. It’s got that crispy and shiny outside. And it’s slightly chewy. My ideal brownie is one that can soak up a little vanilla ice cream when eating them together!

How to Make Chewy Homemade Brownies

How to Make a Brownie with a Crispy, Shiny Top

How Many Eggs To Put In Brownies

Should I Bake Brownies in a Glass or Metal Pan

Can I Add Nuts or Other Add-Ins to These Brownies? 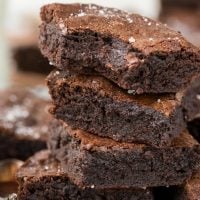