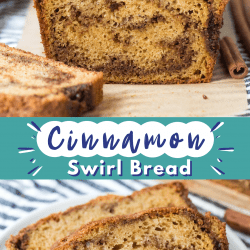 Cinnamon swirl bread is an easy quick bread that’s made with 10 common ingredients! It only takes 10 minutes to prep. The cinnamon sugar mixture makes a beautiful swirl inside. This is a family favorite cinnamon roll bread recipe!

Quick breads and muffins are some of my favorite baked goods because you can eat them any time of the day. Morning. Afternoon. Snack. Dessert. Yum.

This is an easy quick bread recipe that doesn’t require yeast. The end result is a gooey cinnamon bread!

The key to cinnamon swirl quick bread is the swirl. Everyone wants to see that perfect swirl when you cut into the bread.

I add the batter and cinnamon mixture in 3 parts, swirling after the first and second parts. I don’t swirl after the third part because I like having cinnamon on top of the bread.

How To Make Cinnamon Swirl Bread

How to Make this Recipe Gluten Free

I’ve made this cinnamon roll bread with both regular and gluten free flour with awesome results on multiple occasions. I recommend King Arthur’s Gluten Free Measure for Measure Flour. Use it as a one for one substitute for regular flour.

How to Store Quick Bread

Store the bread in an airtight container on the counter. To keep the bread extra moist, wrap in plastic wrap then place inside the container.

How to Freeze Cinnamon Bread

To freeze the whole loaf: allow it to cool completely, then wrap well in plastic wrap, then in aluminum foil. Place inside a ziplock bag. To thaw, place the wrapped bread in the fridge overnight.

To freeze individual slices: allow the loaf to cool completely and slice. Wrap each slice in plastic wrap then in aluminum and place inside a ziplock bag. To thaw, place a slice in the fridge overnight. Or unwrap and microwave for 30 second intervals.

• Do not over mix the batter

I have been guilty of this myself and I am learning to be okay with lumps in my batter. For quick bread, do not use your electric mixer to beat in the dry ingredients, using a spatula and mixing by hand will give you more control. “Mix just until incorporated” means mixing the dry ingredients with the wet ingredients until you can just no longer see any flour streaks. Yes, you should still scrape the sides and the bottom of the bowl, but do that as you’re mixing in the flour.

• Be careful to not over bake the bread

Sometimes the bread can trick you, it can look done on the outside but still be doughy in the middle. That’s when tenting the bread with aluminum foil comes in handy. It protects the top from becoming too brown, overcooked or crusty.

• Know what size loaf pan you have 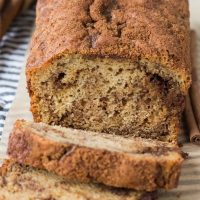