by Beth @ The First Year // Published March 2, 2016 , Updated October 30, 2021
Jump to Recipe Pin Recipe
A twist on classic s’mores -Turtle S’mores Bites! Made with a pecan graham cracker crust, rolo’s, and toasted marshmallows! Make them in the oven in less than 20 minutes! Everyone loves these s’mores bites so I decided to make a delicious variation – a very turtle-y variation with chocolate, caramel, and pecans!

The original recipe is very simple and I wanted to keep it that way. No need to complicate a good thing!

The crust is made out of graham cracker crumbs, finely chopped or pulsed pecans, butter, and powdered sugar.

Instead of using a small hershey’s chocolate bar like in the original, this turtle variation calls for rolo’s! A little chocolate and a little caramel, it’s heavenly.

The turtle s’mores bite is topped with a marshmallow, which I like to toast in the oven using the broiler. Allow the bites to cool, remove them from the mini muffin pan, then my favorite part.. drizzle each with caramel and chocolate! I have a teensy bit of a secret.. in some of these bites I put 2 rolo’s. How daring, I know ;) More rolo’s = more chocolate and more caramel = ooey gooey-ness -make sure the pecans are chopped very fine. If they aren’t, the crust won’t hold together as well. I used a blender to pulse mine into almost what I would call pecan dust.

-I absolutely love squeeze bottles for drizzling chocolate, caramel, peanut butter, etc. They are easy to use and give you great control over drizzling. I’ll put a link below to the squeeze bottles I have. However, if you don’t have a squeeze bottle on hand, I’d place the chocolate inside a sandwich bag and cut a very tiny hole on one corner.

-my secret to cutting marshmallows in half without ending up with a sticky mess is to place a pair of scissors in cold water before cutting them! Re-dip the scissors as needed to keep the stickiness at bay 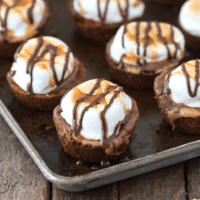 Posted in: Brownies and Bars

« Previous PostRainbow Smoothie
Next Post »Out of the Kitchen February 2016