WE’RE BACK WITH ANOTHER OUT OF THE KITCHEN POST – HERE’S WHAT WE’VE BEEN UP TO FOR THE MONTH OF MARCH! 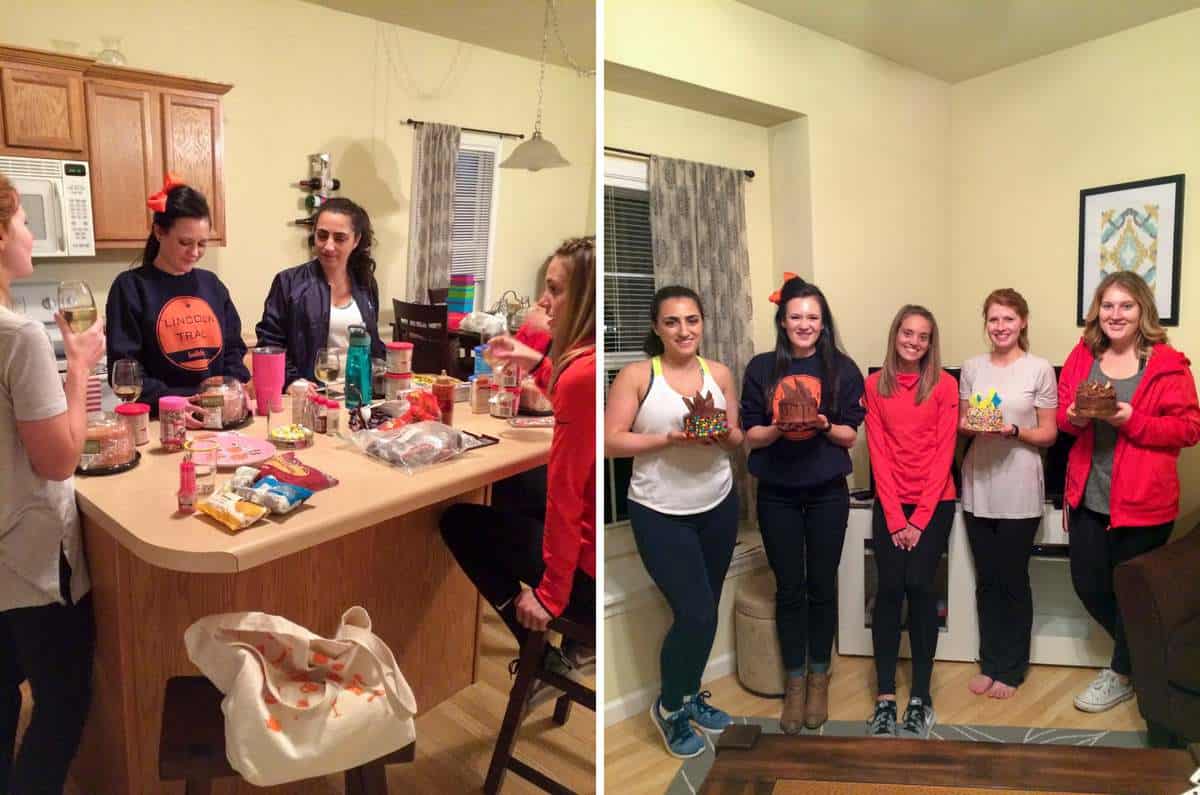 Our bible study had a super fun cake decorating night! The girls did AWESOME and it was great showing them how to frost and decorate a cake. 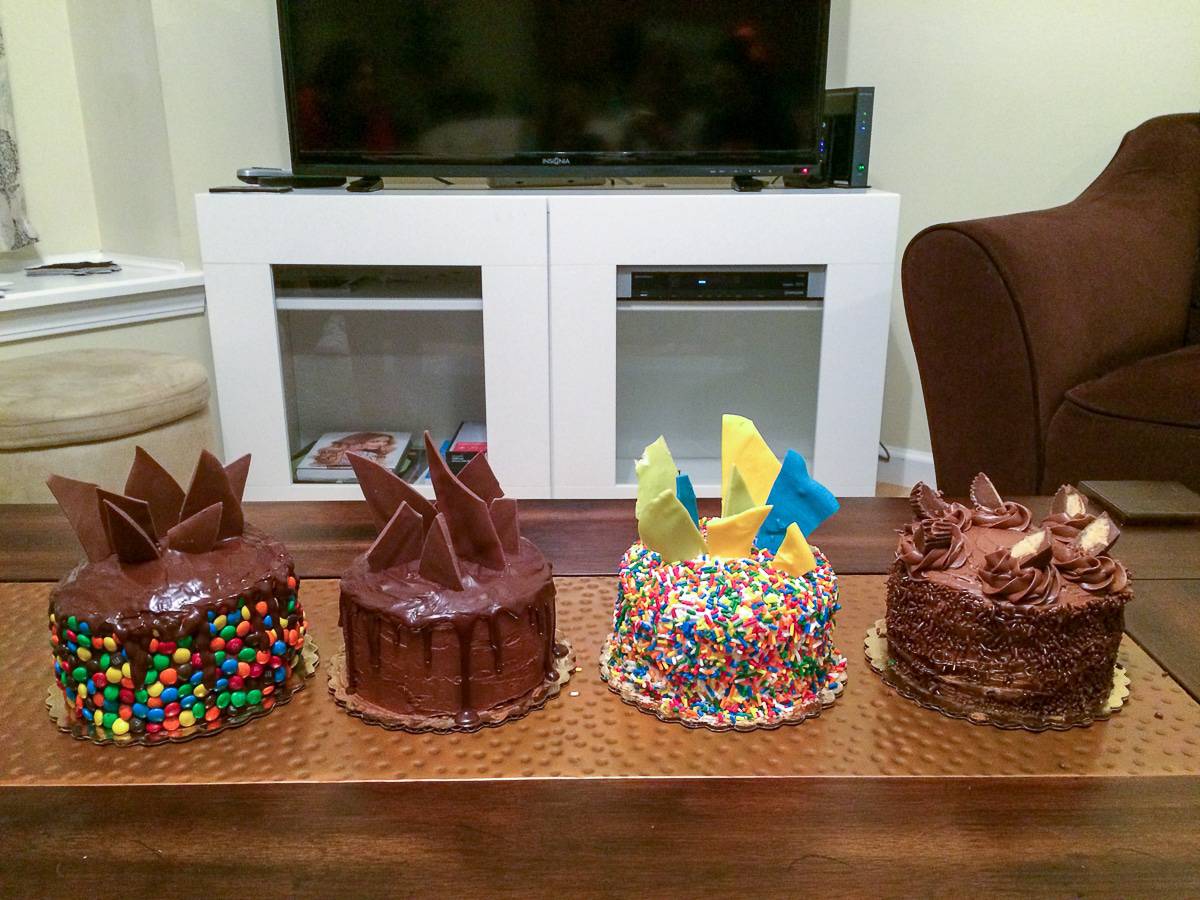 Here are their fun cakes! 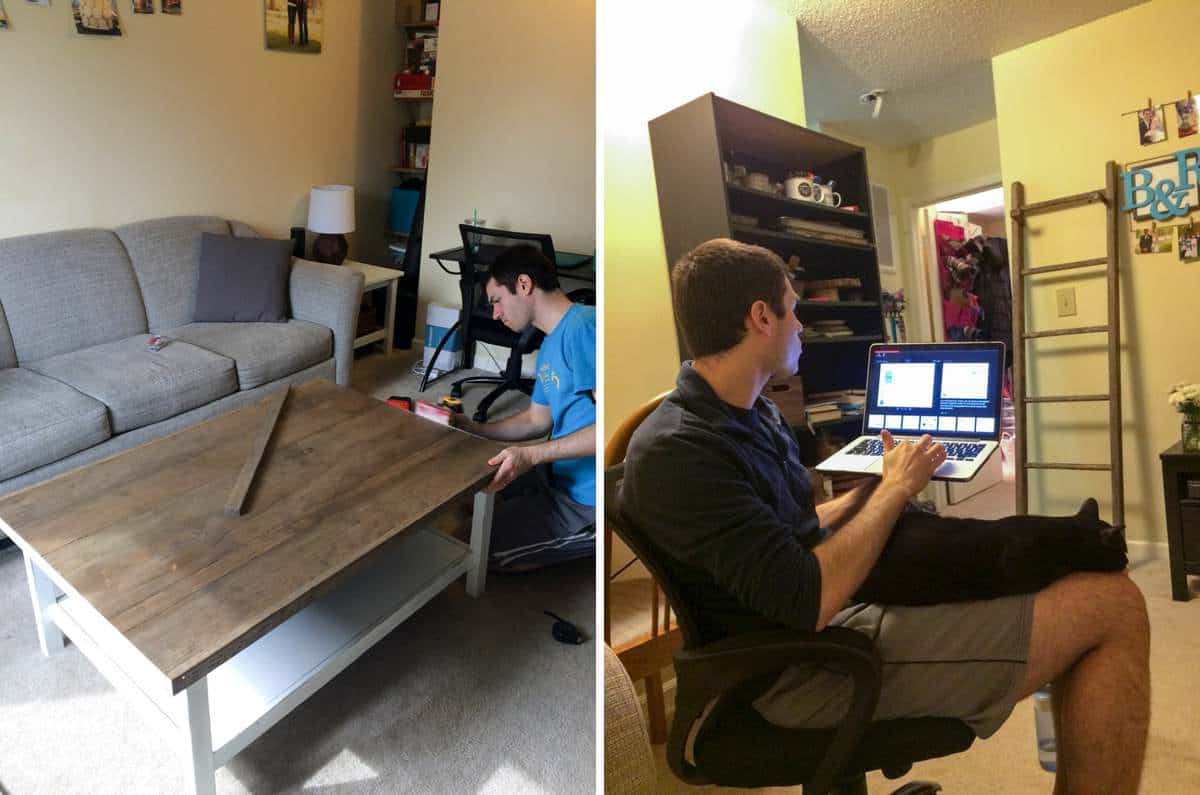 So we’ve been working on this ikea table hack project for a while. I antiqued and stained the wood boards that we glued to the top and added a casing around the table so it looked more finished. It definitely has more character now! It used to be all black. The second photo – Ryan gave a practice talk of his defense to me, all while Salsa slept on his lap!

Ryan during his defense, looking so professional and cute, and sounding so SMART! Ryan said that he looked at me a few times during his presentation and that I looked totally glazed over but with a smile on my face. Haha. I don’t know anything about polymers so a 60 minute talk was way over my head, but I was excited for him the whole time! The second photo – some of the fun chemistry themed items I got for his post-defense party! 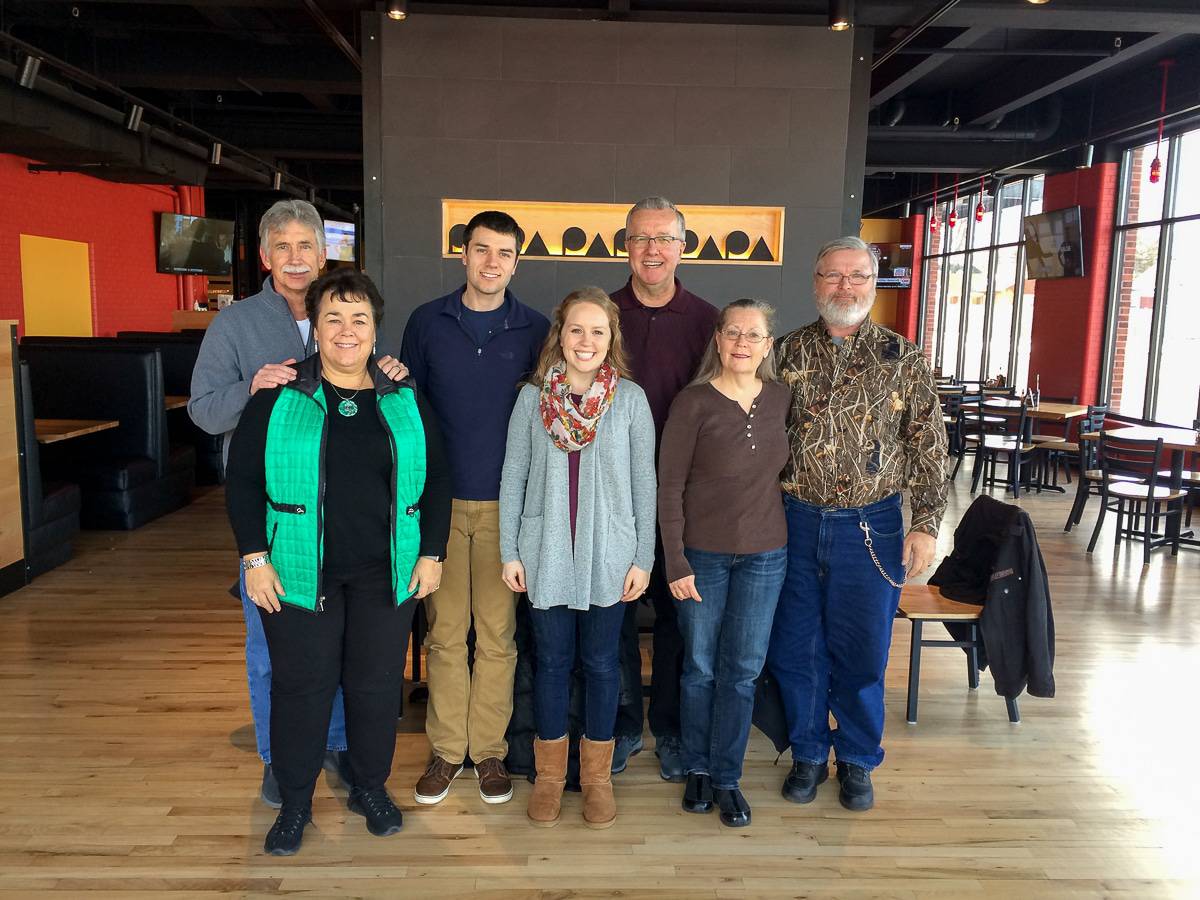 Ryan’s family and my family. They all came down for Ryan’s defense and it was really nice spending time with them. 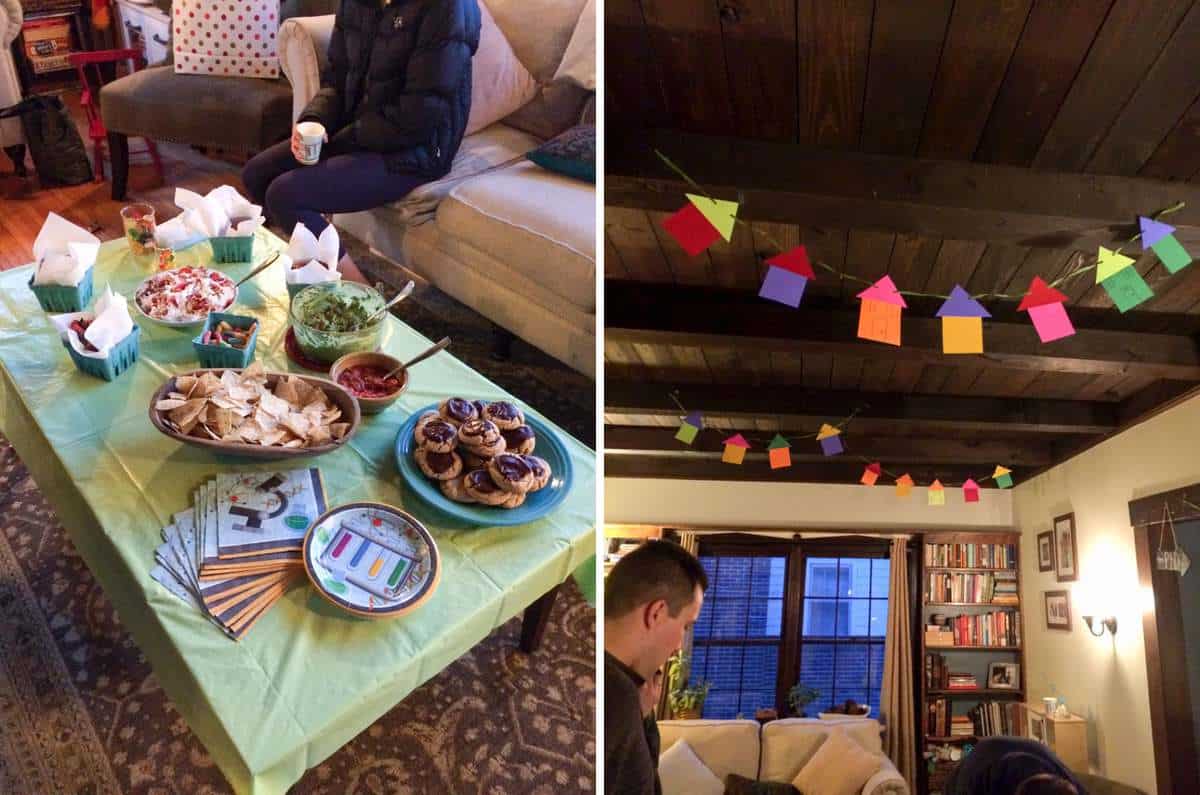 Another surprise chemistry themed party for Ryan! But our friends were sneaky and also combined it into a celebratory moving party which was a surprise to me! Notice those cute house banners?! They made us feel so special and celebrated! 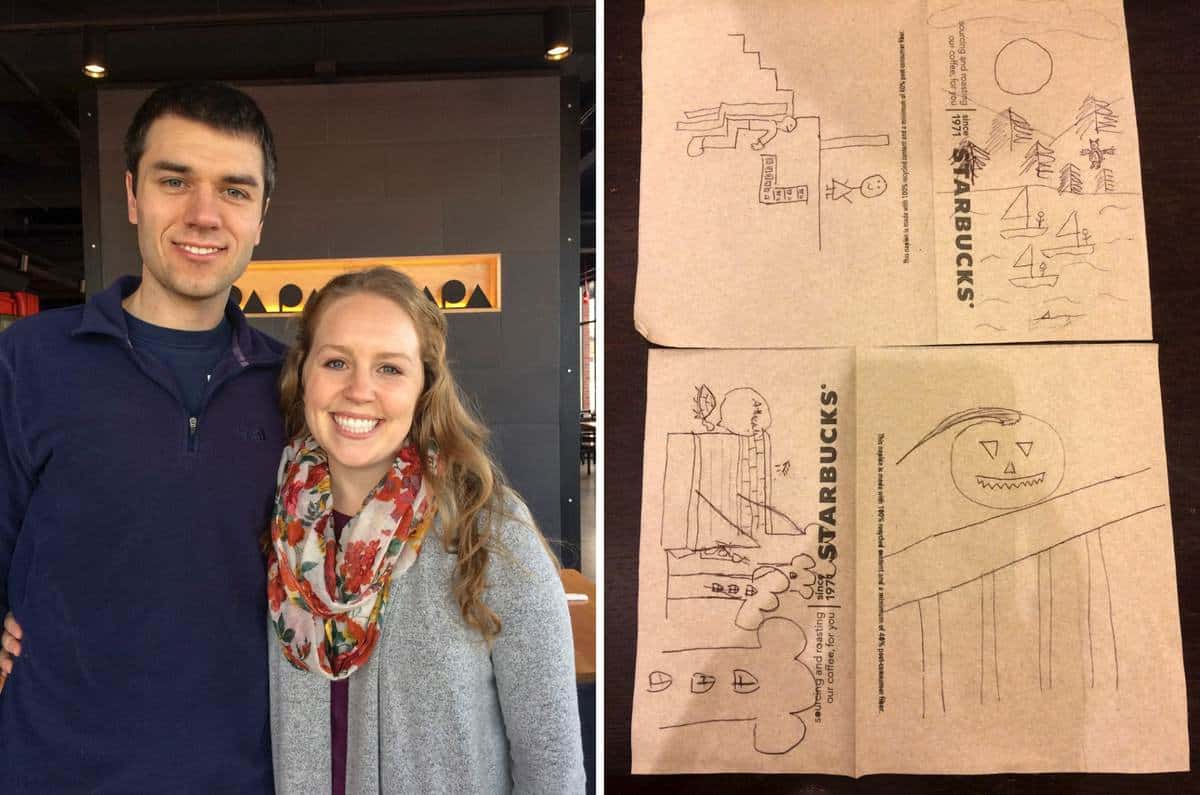 Dr. Ryan and I (ekkk!!!) The second photo – a starbucks date with farkle the dice game and have you ever played the drawing game where one person draws a few scribbles and the other person has to turn it into a picture? That’s always fun! 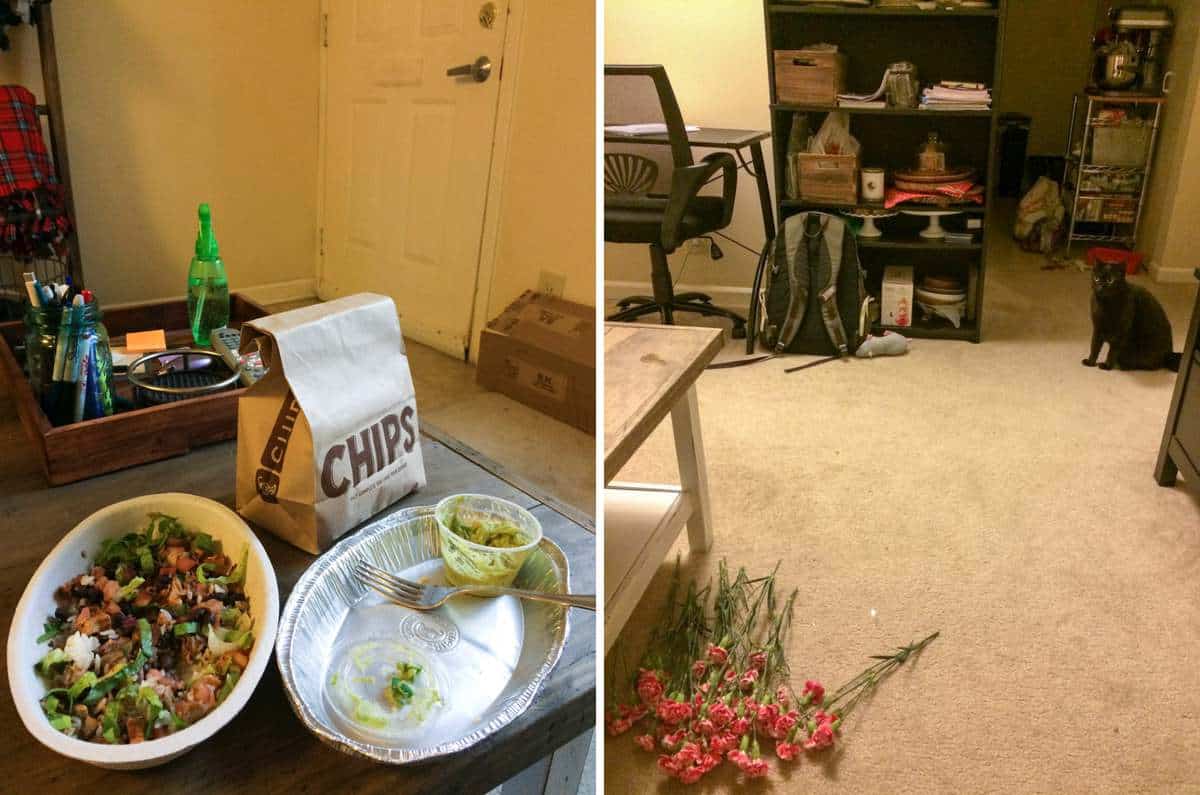 Our new city doesn’t have a Chiptole (I KNOW!!!) so I’ve been getting my fill in now. I wish I could get their guacamole on tap at my house! The second photo – while we were out Salsa knocked our glass vase filled with flowers over. It broke and when we got home it was like he knew he was in trouble. He always comes to greet us at the door, but not that day. 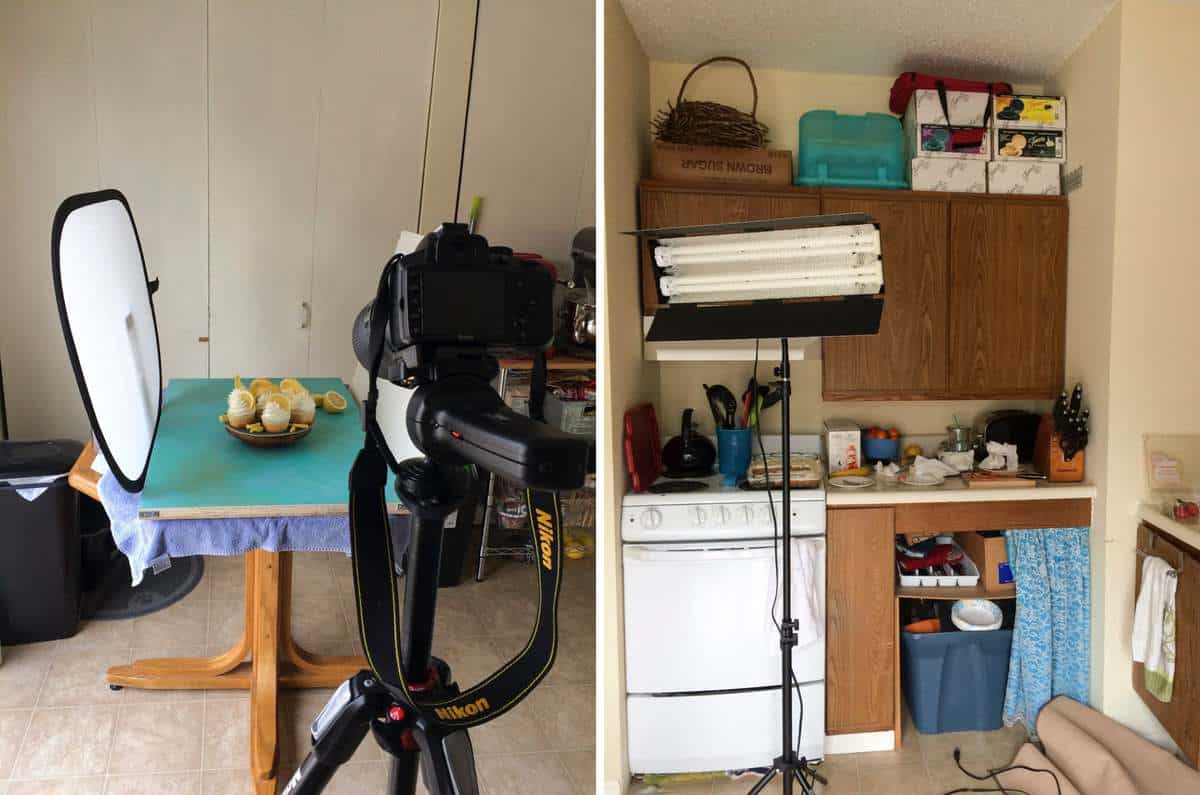 Behind the scenes from photo shoots. Everything looks nice and clean on the shooting surface and crazy everywhere else!

Last month we shared that we bought a house! Well, we haven’t closed yet, so it doesn’t officially feel like we bought a house, but we’re under contract and closing in May! So we’re getting ready to move out of state in 6 weeks. Insert all the emotions here.

This month Ryan had his defense and is officially a doctor of philosophy!!! (I don’t think any amount of exclamation points will show just how excited we are!) It was so much fun celebrating him and showing him how proud we are of him. We had a few chemistry themed parties for him with family and friends – but it feels surreal that he’s almost done.

He’s still wrapping things up, but once he graduates then I think it will feel real. We’re moving 3 days after he graduates, so I am preparing for semi-chaos. But how does one even prepare for that?!

We’re hitting all these big milestones that we’ve been talking about for a long time, so I felt like (and still feel like) an emotional roller coaster.

Some days I’m really excited about moving, other days I don’t even have time to think about it because I’m so busy, and then there are those days where I cry because I don’t want to leave this place that we made home.

I find it very ironic that when we moved to Illinois (for Ryan’s PhD) I didn’t want to come. at all. I didn’t want to leave what felt comfortable in Minnesota. I didn’t think I would be able to make friends like I had in MN.

But God has been incredibly faithful.

My heart feels so attached to a place I didn’t even want to move to in the first place. I’ve developed deep, real, tender friendships. Ryan and I started our marriage here. I went through paralyzing anxiety and learned so much about myself here. I started blogging here. We got Salsa here.

How do you say goodbye to a place and to people that have been so influential in your life?

God has laid it on my heart to be praying for our new neighbors, future church, friends, for Ryan’s co-workers, and especially for the family we are buying our house from.

So we have officially entered that awkward moving phase where you realize we’re moving soon and can’t make any more future commitments, but have to start planning goodbyes. We’re figuring out what we need for our new house, while attempting to pack up our old one. We’re learning how to finish well where we are and how to prepare to be where God has called us next.