I don’t know much about football and that’s okay with me.

I didn’t grow up watching football or rooting for a specific team. Maybe because I always lived in states where the teams weren’t that good!!

Ryan doesn’t even watch football, so I am usually oblivious to everything that leads up to the Super Bowl. And when it’s super bowl Sunday, I’m really there to talk to other people, eat food, and only pay attention to the TV during half time!

But this year the Vikings are one game away from making it to the super bowl, and having grown up in Minnesota, this is kind of exciting! Especially because the super bowl is in Minneapolis. Although, by the time this recipe is posted, the game will be over and we’ll know if they are going to the super bowl or not!

I hope they win this next game, because I would be a little more excited to watch the super bowl!

And the other thing I know is that the Patriots always seem to be in the super bowl… which is boring to me.

My Own Spin On Football Themed Dirt Cups

Every year I like to share at least one football themed dessert. I think it’s fun to have themed food for an occasion like this. Besides, when else is it acceptable to transform almonds into footballs?!

This is our take on a football themed dirt cup! Dirt cups are known for their layers of oreo crumbs and pudding, usually with a gummy worm or two. I kept these football pudding cups simple – for the most part!

There’s an oreo crumb layer, a chocolate pudding layer, green whipped cream, and then a Milano cookie dipped in chocolate with royal icing stitches on top.

You could make these football themed dirt cups even easier by substituting the milano cookie for football sprinkles or a football party pick.

The smaller the cups you use the more dirt cups you’ll be able to make, so keep that in mind. I used 9 oz plastic cups and I only got 4 dirt cups from one box of pudding. I think these game day dirt cups would be perfect in 5-6 oz cups! 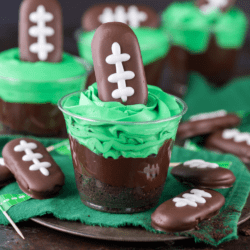