When we go out to eat, I’m the person who likes to order the same thing. I know! This probably goes against your typical perceptions about food bloggers. They are people who like trying new adventurous foods. That’s totally not me. I like eating foods that I know that I like. And then there are certain categories of food that I want nothing to do with. Seafood, cheese, spicy things and mayonnaise.

I’ve been trying to be a little bit more adventurous, but it’s such a bummer when you order a new dish and you end up not liking it. However, there are times when I try something new and I’m so glad I did.

You’re going to laugh, but a few years ago we were at Diary Queen getting ice cream and I decided to not get my normal go-to flavor, a reese’s blizzard, and I opted to try a buster bar. I know, what a bold choice, haha. Ever since I’ve been smitten with DQ’s buster bars. I’ve been known to buy the 6 pack because they are so good.

How To Make Copycat Buster Bars

The classic buster bar has vanilla ice cream, with a ribbon of hot fudge and peanuts in the middle and then more peanuts and fudge on top and then the whole thing is dipped in chocolate to create a chocolate shell.

So I decided to take the ice cream treat that I love so much and make a completely homemade version. Homemade ice cream, homemade hot fudge, and homemade magic shell.

To assemble these buster bars you’ll need standard size wax paper cups. After all of the layers are frozen, make a small cut at the top of the cup and begin to peel the cup away.

How to Dip in Magic Shell

After you remove the cup, you’ll want to dip the whole bar in the homemade magic shell. I have a few dipping tips.

1. After you remove the cup, freeze the buster bars again. This could be for an hour or even overnight.

2. The magic shell should be at room temperature before you dip the bars. Even hot chocolate can melt cold ice cream.

4. Once you dip each buster bar, return it to the freezer. After the chocolate shell hardens, you could wrap each buster bar in plastic wrap if you’d like. Keep them frozen until eating.

Watch out DQ! We’re giving you a run for your money with our completely homemade copycat buster bars, and they are SO good! 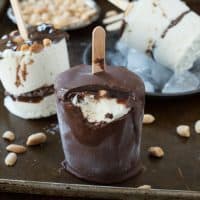