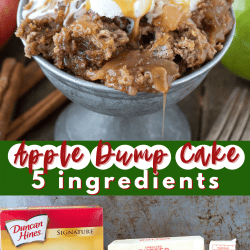 Use apple pie filling and a box of spice cake mix to make 5 ingredient apple dump cake! It tastes just like homemade apple crisp but is way easier! No mixing or additional bowls needed for this dump cake with apples.

We live 10 minutes from an apple orchard and I’ve been stalking their website the past few weeks waiting for them to say that the u-pick honey crisp apples are ready!

I’m not really a big apple connoisseur – but I do know that honey crisps that come straight from the tree taste amazing! There’s just something joyful about munching on an apple while you fill your bag full with a haul to take home.

We like to use a spice cake mix in this recipe because it adds a lot of flavor. I saw online that Duncan Hines makes a caramel apple cake/cupcake mix and that would be delicious too! So if you find that in your grocery store, lucky ducky you!

This apple dump cake recipe is all about ease.

It uses apple pie filling instead of whole apples which cuts down on preparation time. Some people may be more inclined to make a yummy fall recipe if it’s quick and easy to make meaning they don’t have to spend a lot of time in the kitchen.

What is Dump Cake?

Dump cakes are known for sprinkling a box of dry cake mix over the ingredients in the pan and then adding melted butter on top of the cake mix.

It’s magical what happens inside the oven. The result is a cobbler like dessert with fruit pieces and cake mixed together! It’s not the type of cake you cut into neat squares, just scoop it onto your plate and eat!

How to Make Apple Dump Cake

How Do You Know When a Dump Cake is Done Baking?

Unlike traditional cakes, the toothpick method won’t work for an apple dump cake with pie filling. The top of the dump cake should look golden in color and look and feel like a “crust”. But once you break the the crust, the cake will be moist because of the fruit.

Rule of thumb: look for the top of the cake to be golden in color.

Can Dump Cake Be Made Ahead of Time?

Most people prefer a warm dump cake, since it does resemble a cobbler. So with that in mind, yes, you can make apple spice dump cake ahead of time, but I would recommend not making it more than 1 day in advance. You can re-heat the entire pan in the oven.

How to Store Dump Cake

Store in the fridge covered with a lid. Best eaten within 3-4 days.

You could substitute a white, yellow, or apple cake mix in place of the spice cake mix.