Make an easy American Flag Cake for 4th of July. Use your favorite flavor of cake for the cake portion, then add cool whip and colored shredded coconut in a flag pattern.

The basics of the recipe call for a 9×13 inch cake, shredded coconut, red and blue food coloring, and cool whip. Easy, right?

We decided to make a coconut sheet cake (a 9×13 inch cake) to pair with the coconut topping.

If you’re looking for another cake flavor, try..

There is so such flavor in the cake and sweetness in the coconut topping I decided to keep the frosting on the cake very light and used cool whip. You could also use homemade whipped cream – I love adding a little bit of vanilla paste to mine!

How to Dye Shredded Coconut

You’ll need blue and red food coloring to dye the shredded coconut. I find that it’s easiest to use the more watery type of food coloring instead of the gel food coloring when dying the coconut.

Put the coconut in a ziplock bag, add a few drops of the food coloring, close the bag and shake it until all of the coconut is evenly dyed.

How to Assemble an American Flag Cake

Once the cake is completely cooled, spread the cool whip on top of the cake. Next add the blue colored coconut, making a large square in the upper left hand corner of the cake. I just eyeballed mine.. adding more coconut and making the square larger until it looked proportional. Next are the stripes. Start by adding a red stripe, followed by white, red, white, red, white, and ending with red.

How to Properly Measure Flour 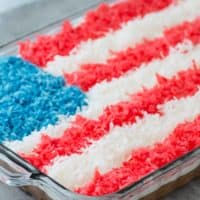 Posted in: 4th of July, Cake