This sweet little blog of mine is getting ready to have a redesign. It’s been in the works for a while and I am super pumped for everyone to see it soon! Naturally with a new design, there is a little spring, er um.. summer cleaning to do. I’ve been working on cleaning up my recipe index and tags. If you’re unsure of what those things are, the recipe index is where you can see all of my recipes and search for recipes given a specific category, like cake or cheesecake. Tags are used when you want to search for recipes that use a specific ingredient, like when you want to see all of our recipes that use powdered sugar or cream cheese. To make this recipe, start off by making the 4th of july ice cream cones. Take regular sugar cones and dip the tops in melted white chocolate and then roll them in a bowl of 4th of july sprinkles. Allow the chocolate to harden.

Next, using a hand mixer, beat together the cream cheese, sugar, and vanilla until smooth and fluffy. Then fold in the cool whip until combined.If your cheesecake mixture seems to loose, you can refrigerate it for a few hours or even overnight. That will help stabilize it. Transfer the cheesecake mixture to a piping bag fit with a piping tip (I used a wilton 2d tip) and pipe cheesecake into each cone. You will definitely want to pipe the cheesecake into the cones right before you plan to serve them. Or take a head count of how many people want a cheesecake ice cream cone and then prepare them. I added a little blueberry sauce and a maraschino cherry to each one. It’s too bad that blueberries are actually purple, but it’s close enough to red, white, and blue! If you’re looking to buy 4th of July sprinkles, I bought mine on amazon. To put the sprinkles on the cones

To assemble the ice cream cones

Find the equipment we used in our Amazon affiliate store.
posted in 4th of July
24 comments » 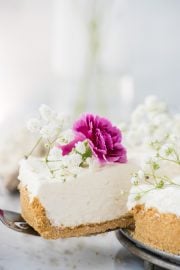