This fall is filled with a bunch of firsts.

And now I made apple pie FTFTE (for the first time ever!)

Ain’t nothing standing in my way this fall. I followed the directions from The Kitchn on how to season a cast iron skillet. It’s super easy, preheat the oven to 325º F, then wash and dry your skillet. Next apply a thin coat of vegetable oil all over the pan. Place the pan in the oven for 1 hour. Be sure to put a baking sheet below your skillet to catch any dripping oil. After 1 hour, turn off the oven and allow the pan to cool completely.

Now that your skillet is seasoned, let’s make the pie. You could use homemade pie dough or store bought dough.. honestly I don’t think it matters in the grand scheme of things, apple pie is the end goal not some special homemade pie crust that took you 2 days to make. I’m all for simplifying things where I can, but that being said, I did make this skillet pie with homemade dough so I’ll provide that recipe in the recipe section.

You could make this apple pie in pretty much any sized skillet. I used a 6.5 inch and a 8 inch skillet, that way you can you decide if you want a lot of apple pie or like 2 giant servings. Or both :) I also created an open face apple pie and drizzled it with caramel sauce and added the “Happy Fall” lettering. I don’t think there is anything cuter than an apple pie that says “apple pie!” 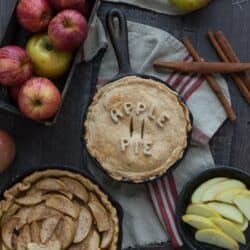 Pie Dough (this will make 2 crusts)

To prepare the filling

How to assemble the pie

To make the pie crust letters