We’re back with another Out of the Kitchen post – Here’s what we’ve been up to for the month of June! 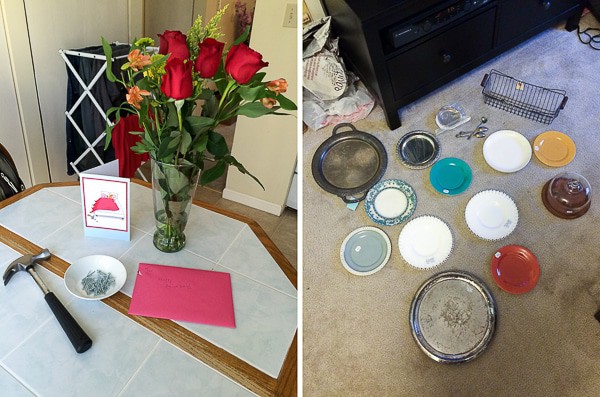 We celebrated our 3rd wedding anniversary at the beginning of the month. I found the perfect card for Ryan! The husband nails his side of the covers to the floor to keep his wife from taking them. And I set out some nails and a hammer in case Ryan wanted to do the same, haha. The second photo – tons of new blog props! And when you buy new blogs props you might run out of space.. see the next photo.. :)

..so you buy a new bookshelf to store all of your props! It’s definitely reminds me of the if you give a mouse a cookie children’s books. And let’s be real, this isn’t the only prop storage.. this shelf joins an already existing shelf plus a huge under the bed storage container. 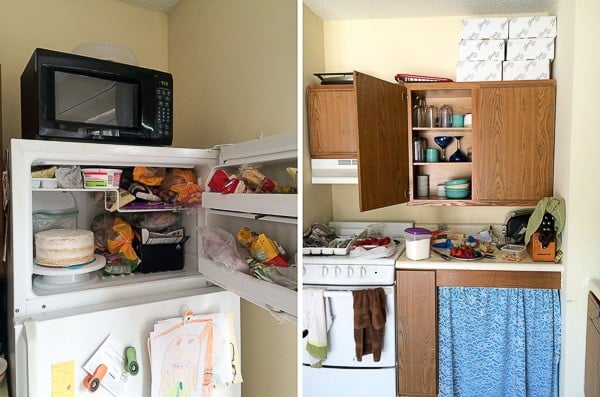 Is anyone else’s freezer packed to the brim? Especially when I need to harden a crumb coat in the freezer, it takes me 5 minutes to just rearrange everything so I can fit the cake in! A second blogging fridge and freezer would be nice.. in my dreams! The second photo, chaos takes over when I’m in the middle of a photo shoot. I’m a very clean and organized person normally, but when I’m shooting, all of that goes out the window. Stuff covers the counters and the floor, and when I get out of the zone, meaning I’m done shooting, I finally see everything around me and I’m always like “What happened?!” 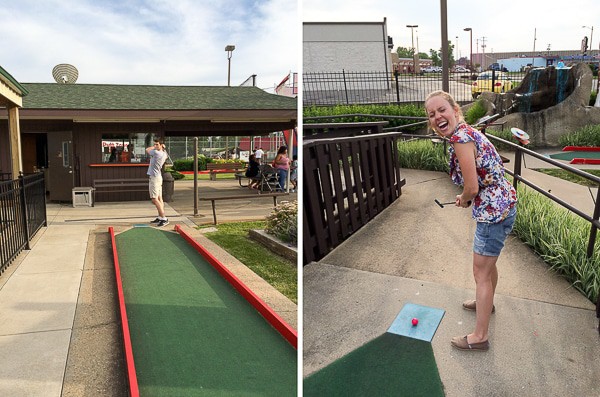 We love mini golf! And I especially like it when I am winning, which I did when we went this time :) Our course has silly things you can do at each hole, like hit the ball using only your foot or close your eyes when hitting, that’s what I was doing! 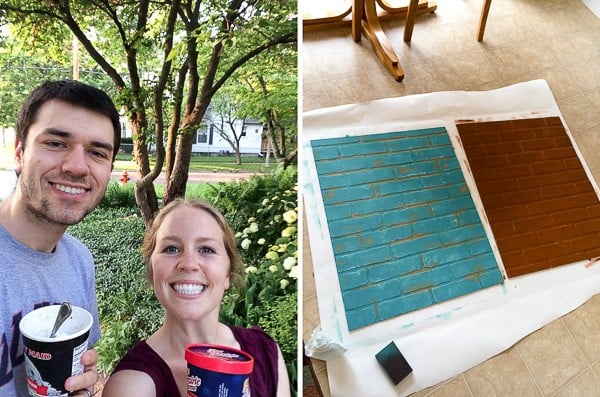 We live about 6 blocks from a grocery store, which is convenient when I run out of something last minute. Ryan and I like to walk to the store to get ice cream, and this time we were smart enough to bring spoons with us, so we could eat the ice cream on the way home! The second photo, last month I shared a picture of some of the faux panel backgrounds I painted. I love them! I had some more pieces to use so I painted one teal and one brown. You’ll see those backgrounds in upcoming posts. 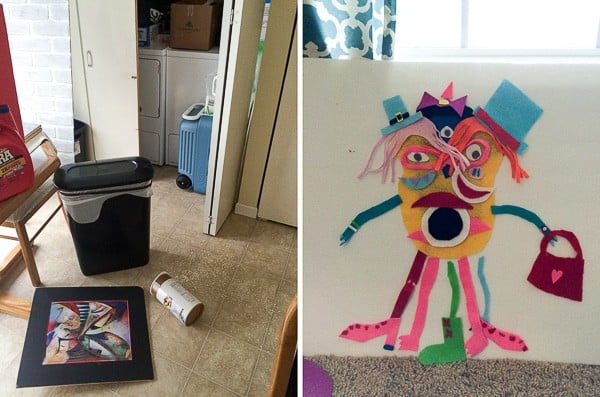 If you look really close, you’ll be able to see oats all over the floor! Apparently, using an oat container as a weight for my white bounce board is not as sturdy as I thought. Next time I’m going to tape the lid onto the container, ha ha! The second photo, so some of you know that I work as a nanny, and one of my kiddos made this awesome 3 headed felt monster! I love their creativity! 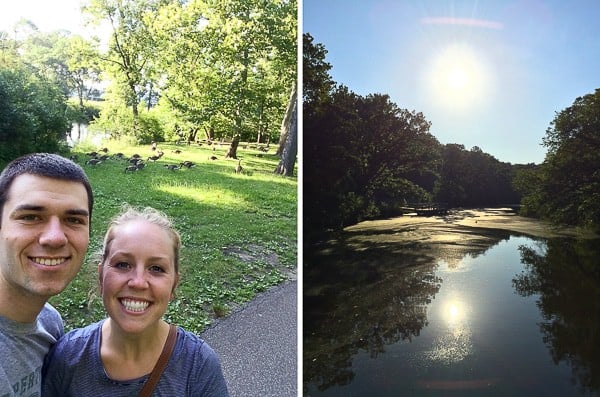 After having lived in the same city for 3 years, you’d think you explored everything, but we found a new park to walk through! Complete with geese and a LAKE! Which is a big deal because we previously lived in Minnesota, so we’re used to big bodies of water, which are hard to come by where we live now. 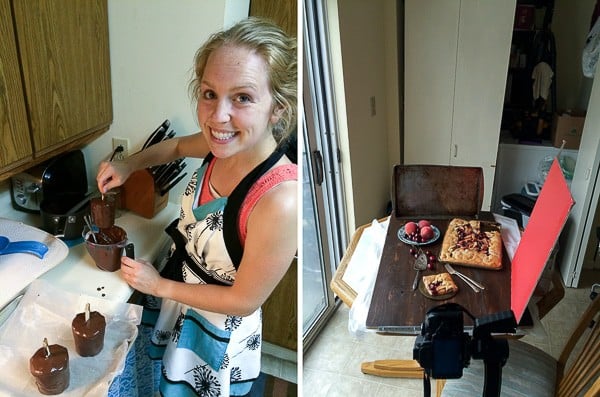 Here’s a photo of me dipping popsicles into homemade magic shell. They turned out way better than I expected because when you’re working with ice cream and warm chocolate, that could be a disaster! The recipe will be up later this month. The second photo, a sneak peek of something delicious and it uses cherries and peaches! :) 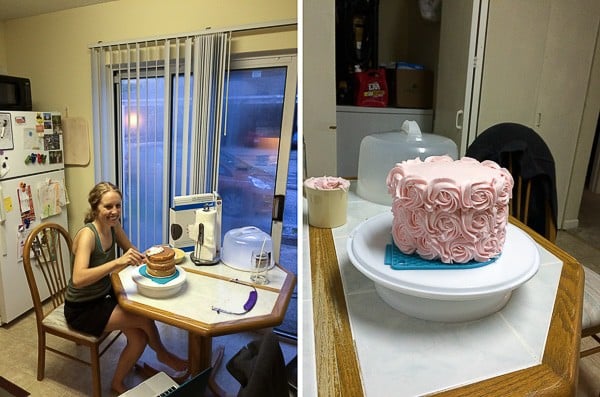 I’ve been a cake making factory lately! I’ve had the opportunity to make a few smash cakes for birthday photo shoots and it’s been fun! But I’ve been going through butter like crazy :) 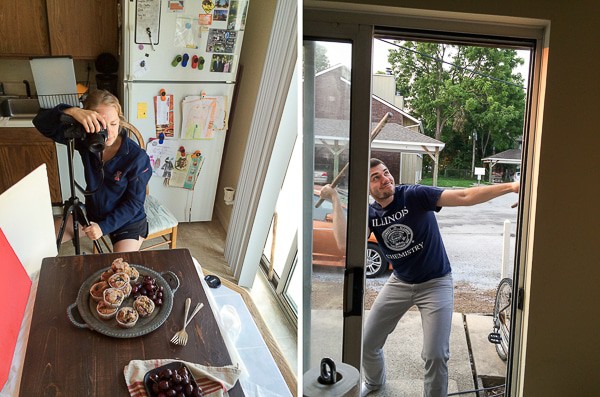 I love shooting during the early morning hours. My main source of light comes from my large patio door so in the afternoon the light becomes too harsh. I was pushing it a little bit with this photo shoot though.. I photographed these muffins on a sunday morning, knowing we had church too, so I was working like a mad woman! The second photo, these are the techniques my husband uses to kill a spider. You could swap the wooden pole for a spear and he’d look like he was ready to catch dinner!

Thanks for seeing what we were up to in the month of June! See our previous Out of the Kitchen posts.