Orange Poppy Seed Cupcakes are a unique citrus cupcake recipe. They are made with real orange juice and orange zest!

But I’m here to show you that this is an amazing cupcake flavor! And it’s memorable because it’s different.

The 2 key ingredients to these orange poppy seed cupcakes are orange zest and fresh orange juice. Those ingredients add amazing REAL orange flavor. And the orange flavor isn’t overpowering like it can be with fake orange stuff.

I like to add a little bit of orange gel food coloring to the buttercream – it creates a pretty pastel orange color! 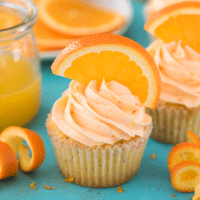