You might have noticed that there has been an explosion of cupcake recipes lately. And it all started with easy oreo cupcakes.

I never came out and said this but, I had a fear of frosting cupcakes. Not like a ‘I think the cupcake is going to bite my hand off’ fear. Like a ‘I don’t know how to pipe frosting and it looks scary, what if I mess it up’ kind of fear. When I would look at my friend’s blogs, I would just stare at their cupcake photos, thinking ‘That is SO gorgeous… but how do they do that?!’ I’ve even told my friend Lindsay from Life, Love & Sugar that I would be the first person to sign up if she started offering a class on how to make cupcakes and cakes.

So I set out to conquer my cupcake fear.

I had a few bumps along the way. For example, I already owned some piping tips so when it came time to actually pipe the frosting onto the cupcake, I thought I had all of the supplies I needed. But I was wrong. The piping tips I had were super small, but I didn’t know they were small until I tried piping frosting with them. The tips I have are more for decorating and fine details. So I researched, ahem googled “best piping tips for frosting” and I learned that I needed to buy extra large ones. Of course now that I am on the other side, I think piping frosting is super easy. I haven’t experimented with many techniques, but if you want big beautiful swirls, use a flower or star tip. Those are great choices for beginners! Let’s answer the question of “How do I pipe frosting on a cupcake?” Begin to pipe the frosting onto a cupcake, starting with the outside edge and working your way into the center of the cupcake, progressively stacking the frosting as you go around in circles toward the center.

Now that I’ve learned how to pipe frosting on cupcakes.. the next thing I want to learn is how to make layered cakes! And the research starts all over again :)

The base of this cupcake recipe uses our vanilla batter. It’s delicious and moist from the sour cream in the batter. The kiwi buttercream is really what this recipe is all about though! It’s really easy to make, just add pureed kiwis to our original buttercream recipe. 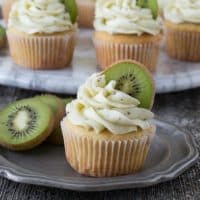 4.43 from 14 ratings
Prep Time: 15 mins
Cook Time: 15 mins
Total Time: 30 mins
Yield: 12 cupcakes
The base of this cupcake recipe uses our vanilla batter. It’s delicious and moist from the sour cream in the batter. The kiwi buttercream is really what this recipe is all about though!
Print Recipe Pin Recipe Rate Recipe