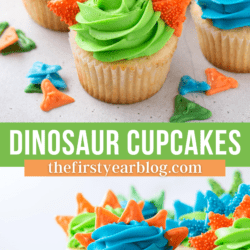 These easy dinosaur cupcakes are perfect for a kids birthday party! Top each moist vanilla cupcake with a swirl of colorful frosting and dino spikes for an adorable sweet treat.

While some trends and characters come and go, kids have been loving dinosaurs for decades, which means parents are always looking for fun dinosaur birthday ideas. You can go to the bakery and pay a pretty penny for custom-made cupcakes, or you can make these cute dinosaur cupcakes at home.

If you’re not confident in your cake decorating skills, don’t worry—this is an easy recipe that even beginning bakers can handle. The spikes are made by piping simple triangles of melted almond bark, and you don’t have to draw faces, pipe on scales, or anything elaborate like that!

Scroll down to the recipe card below this post for ingredient quantities and full instructions.

What Is Almond Bark?

While the name “almond bark” might make you think we’re talking about something similar to chocolate bark, it’s actually a confectionary coating. It’s made with sugar, vegetable oils, and flavoring like vanilla or almond extract. It’s commonly used to coat things like pretzels and Oreos.

You can find it in the baking aisle of most grocery stores, near the chocolate chips and bars of baking chocolate. If you have trouble finding it, you could also use candy melts, which are similar.

How to Make Dinosaur Cupcakes

You can easily split this process into two days. Make the cupcakes and the spikes the first day, then make the frosting and assemble the dinosaur cupcakes on the second day.

Prepare. Preheat your oven to 350º F and line a muffin pan with muffin liners.

Mix the wet ingredients. In a mixing bowl, beat the butter and sugar with an electric mixer for 1-2 minutes, or until the mixture is fluffy. Beat in the egg whites, sour cream, milk, and vanilla extract.

Mix the dry ingredients. In a second mixing bowl, sift the flour, baking powder, and salt.

Finish the batter. Slowly add the dry ingredients to the wet ingredients a few spoonfuls at a time. Mix just until incorporated, then divide the batter into the muffin liners, filling them no more than halfway.

Bake. Place the muffin pan in the oven and bake for 17 to 19 minutes at 350º F, or until only a few moist crumbs remain on a toothpick when inserted into the center. Let the cupcakes cool completely before you frost them.

Melt the almond bark. While the cupcakes are cooling, roughly chop the almond bark into smaller pieces. Place it in a microwave-safe bowl and microwave on 50% power until melted, stirring occasionally.

Color the almond bark. Divide the melted almond bark into 3 bowls; color each with gel food coloring. Transfer each color into a squeeze bottle, then pipe small triangles onto a baking sheet lined with a silicone mat or parchment paper. Add sprinkles if you’re using them and allow the almond bark to set completely.

Cream the butter. Beat the butter and vanilla extract in a mixing bowl with an electric mixer for a minute or two, until it’s fluffy.

Finish the frosting. Slowly add the powdered sugar, mixing on low until combined. Add a splash of milk or cream if the frosting seems too thick. Whip for 3 to 4 minutes.

Add color. To color the frosting 2 different colors, divide the frosting into 2 bowls, add the food coloring, and beat until each color is combined.

Transfer to a piping bag. Scoop each frosting into a separate piping bag fitted with a piping tip; I used a Wilton 1M.

Frost and finish. Pipe the frosting onto the cooled cupcakes, then top each with 5 spikes.

Here are some simple tips for perfect dinosaur cupcakes.

Dinosaur cupcakes are best the day they’re decorated, but they can be stored in an airtight container for up to 3 days.

You can make dinosaur cupcakes out of any flavor of cupcake, so if vanilla isn’t your little one’s first choice, feel free to use another flavor. Here are some ideas:

Can This Recipe Be Frozen?

If you want to get a head start on this recipe, you can make the vanilla cupcakes and freeze those in a freezer bag or airtight container for up to 3 months. Let them thaw at room temperature, then frost and decorate them.

If you have leftover cupcakes that you want to freeze, set them on a baking sheet and place them in the freezer until the frosting is solid. Then, transfer them to an airtight container and freeze for up to 3 months. Let them thaw in the refrigerator before serving. 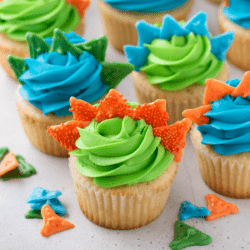