You’ll never guess what we did this weekend. Ryan and I want to a demolition derby!

I had no idea what a demolition derby was. Apparently you aren’t exposed to those things growing up in the suburbs. But now that we live in the middle of corn town USA, going to the demolition derby is what everyone does on a Saturday night.

Before we even went I had to get clarification from a friend what on exactly happens at these derbies. I wasn’t provided with a lot of details, but I think my friend wanted me to be surprised.

I’m not sure if I was more surprised at the derby or with the fight that broke out before it all started. It wasn’t even between 2 drivers, it was between 2 fans in the stands. It was way too much craziness for this girl, but I couldn’t help but look to see what was happening, I had never seen anything like that! Haha. For anyone who doesn’t know what a demolition derby is, here’s the proper explanation – BUMPER CARS! Literally.. it’s like real live bumper cars.

We even saw a car that looked just like our old ford taurus that we sold back in March. We were joking that’s where our car went to die. And it could be the truth. It was one big ball of metal, in the shape of a car. I wonder if we would have gotten more money selling it to a demolition derby driver.

Now Ryan thinks it would be fun to be in a derby. I thinking.. never in a million years! This isn’t a typical recipe for the blog. Normally I don’t use box mixes, but sometimes I like to bake the easy way. I call it the “I was just asked to bring dessert for tonight’s party” recipe. It will be done in no time, meaning you’ll have more time to do your hair, or if you’re like Ryan, more time for a pre-party nap :)

And taking a short cut by using a box of brownie mix means you’ll have time to make homemade chocolate curls. This tart just got infinitely fancier! 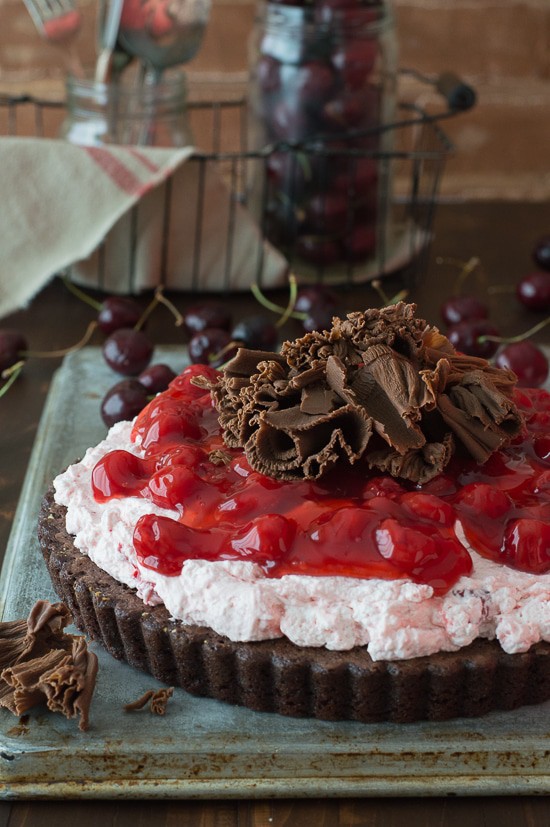 How to make chocolate curls