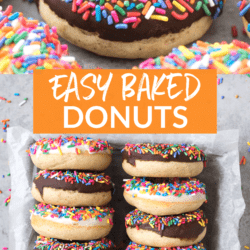 This is hands down our favorite baked donut recipe! Easy to make donuts at home with options for chocolate or white chocolate glaze, we love adding lots of sprinkles! Tried and true recipe with an amazing gluten free donut option.

Donuts are my jam!

I don’t think it was until I found out I had a gluten allergy that I actually started to like donuts. So I missed all my glutinous donut opportunities!

When we were living in Illinois, we made a few trips to Chicago because they have the best gluten free donuts there – I would literally buy a dozen just for myself and freeze them!

Now whenever we go to a new city, I always google to see if there is a gluten free donut shop. This girl will never pass up on a donut. I might not eat it right away, but it’s always a good idea to get one.

I’ve made a few donut recipes over the years but I haven’t written down the recipe for a classic baked vanilla donut until now. And oh my gosh, I like mine with chocolate glaze and lots of sprinkles.

I’ve never been a fan of white chocolate, but I did include that as a frosting option!

That being said, I don’t market my blog as a gluten free exclusive blog because I’ve learned that almost any recipe can be made with gluten free flour. The only one I’ve struggled with are gluten free cinnamon rolls – but everything else turns out amazing!

Our baked vanilla donut recipe can be made with regular all purpose flour or with gluten free flour! My favorite is King Arthur’s all purpose GF flour that comes in a navy blue bag.

This is the donut pan I use. Before filling the pan I spray it with nonstick cooking spray and use a paper towel to wipe the spray around each donut well.

Next I transfer the batter to a piping bag fit with a large round tip. You can also use a ziplock bag with one corner cut off. Twist the top of the bag closed and apply pressure with one hand and pipe the batter into the well. Do your best to evenly divide the batter among each donut well.

Okay – time to talk about the tops of the donuts because that’s really the best part!

I wanted a donut glaze that would harden but not crack off and break when you bite the donut. So what’s the magic recipe? Chocolate chips plus coconut oil. And it doesn’t taste like coconut oil at all.

My absolute favorite place to buy BRIGHT multi-colored sprinkles is Walmart! I’ve searched high and low everywhere, and the Great Value brand sprinkles are hands down the best.

How To Make Chocolate Glaze

In a microwave safe bowl melt chocolate chips and coconut oil (or vegetable oil). Dip the donut into the chocolate, allowing the excess to fall off back into the bowl. Place the donuts on a tray to allow the chocolate to set.

How To Freeze Baked Donuts

Allow the donuts to cool completely. Dip and allow the glaze to harden. Wrap each donut in plastic wrap, then place inside a freezer ziplock bag or container.

To thaw: microwave for 20 seconds or place on the counter for 30 minutes.

How To Make Gluten Free Donuts

I’ve made these donuts with both regular and gluten free flour with awesome results on multiple occasions. I recommend King Arthur’s Gluten Free Measure for Measure Flour. Use it as a one for one substitute for regular flour.

How To Properly Measure Flour

Sticking the measuring cup straight into the bag of flour will result in too much flour to be packed into the cup, which can result in dry baked goods. 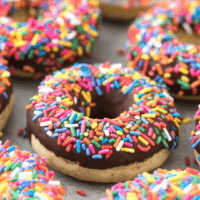