On Friday it was 90 degrees and crazy humid. It was the kind of humidity where you either consciously decide to not do your hair or you borrow your husband’s hat to cover up all those crazy frilly fly-aways. Either way, it’s a lost cause and I label it a bad hair day. Now let’s jump to Saturday, and all I can say is hello fall! While I am not quite ready to fully embrace the fall weather, we had a great weekend, and were able to spend time with Ryan’s family. We filled them up with delicious food and I am pretty sure I ate enough espresso brownies to last me a month. We introduced Ryan’s parents to the game Farkel, it’s a dice game where you try to roll different combinations to be the first person to reach ten thousands points. Ryan’s parents were the victorious winners, so we dubbed them the king and queen of farkel and made jokes that royalty was visiting us. Have you played farkel? On Sunday we visited the apple orchard and loaded up on apple donuts, apple fritters, and apple cider. Before we went picking, we were brainstorming all sorts of dishes we could make using the apples we were going to pick. Then we get out to the apple trees and find out that the orchard was already sold out of honey crisp apples, such a bummer because those are my fav. I thought I was ahead of the game going to the orchard so early in September, but I guess other people had honey crisp apples on their mind. Although we left the orchard without any apples, I had an idea for a recipe that uses the next best thing – apple pie spice – plus cinnamon and chocolate. Mmmm I’m sold. This is the perfect fall snack, and I bet its a lot healthier than the 7 brownies I ate this weekend. This recipe is super simple with only 7 ingredients – this could be whipped up before your kiddos come home from school or as a fun after dinner dessert. I’m trying to hang onto the summer sun for as long as I can, it could be 80 degrees all September and I would be perfectly happy. But the one place I will happily embrace fall is in my kitchen :) 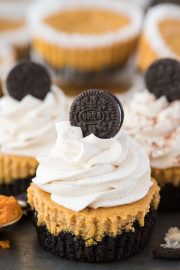 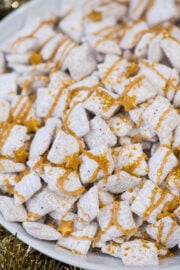 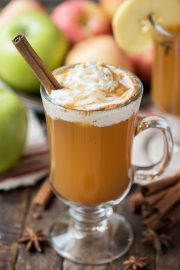